When it comes to being an involved parent, we often hear excuses from CEOs such as “I’m too busy”, “I have no time”, “I’m running a company”, etc.

Now, let's imagine being the 44th President of the United States, where the word “busy" takes on a whole different meaning!

If sitting in the Oval Office and still finding the time to being to be an involved father, then you can make it happen as well regardless of your perceived work commitments. It all boils down to what you consider priorities and what you are willing to sacrifice in the short-term in order to benefit your kids in the long-term.

DAD.CEO has compiled a review of key moments from 3 phases of parenting from Barack Obama's life. From being a regular father just like the rest of us to becoming the 44th President of the United States of America and finally on returning to civilian life and seeing his children entering adulthood.

Barack showed us that no matter what your position or what challenges you are facing, being an involved father is the biggest priority and responsibility there is and one that needs to take precedence over all else, even if that means being the Commander-in-Chief! 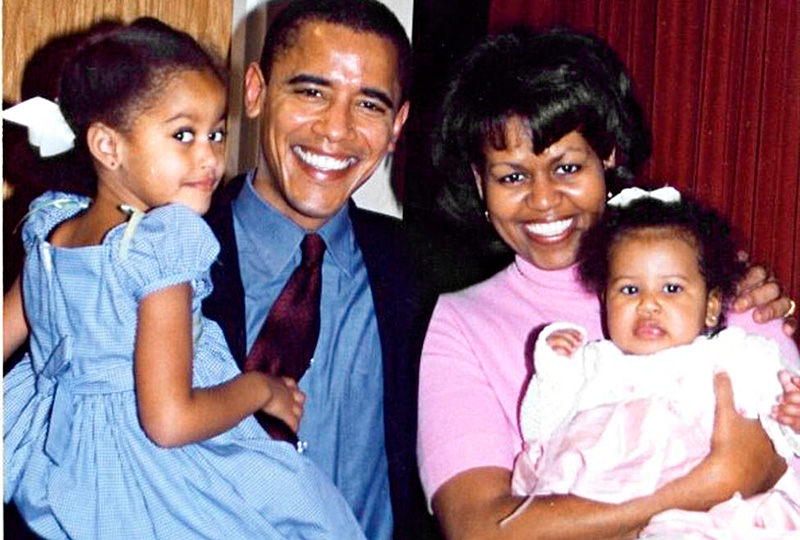 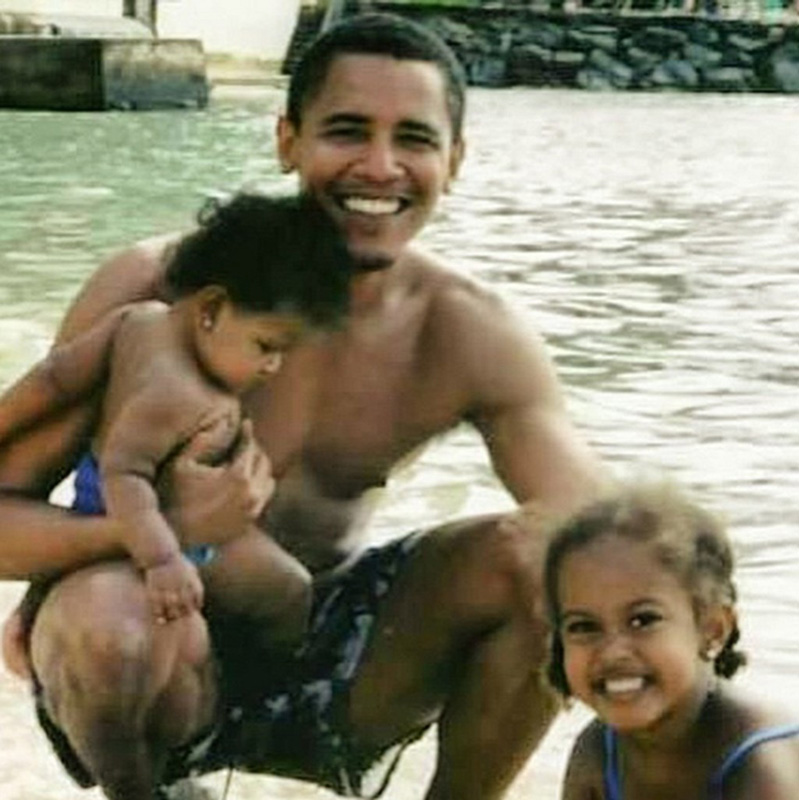 BARACK OBAMA ON HAVING KIDS

“For three magical months, the two of us fussed and fretted over our new baby, checking the crib to make sure she was breathing, coaxing smiles from her, singing her songs, and taking so many pictures that we started to wonder if we were damaging her eyes.

Suddenly our different biorhythms came in handy: While Michelle got some well-earned sleep, I would stay up until one or two in the morning, changing diapers, heating breast milk, feeling my daughter’s soft breath against my chest as I rocked her to sleep, guessing at her infant dreams.”

Like any parent, tragedy can strike at any moment no matter who you are. Barack Obama recalled the worst memory he had as a parent was when Sasha who at the time was 3 months old had fallen ill with meningitis.

“Being at the hospital and hearing her crying and having to give her a spinal tap. I think somebody once said that being a parent is basically like having your heart outside of your body. You feel so vulnerable in those moments.”

As a parent first, Barack Obama worried about his work/life balance and how it would impact his family while being focused on his growing position in the United States Senate. 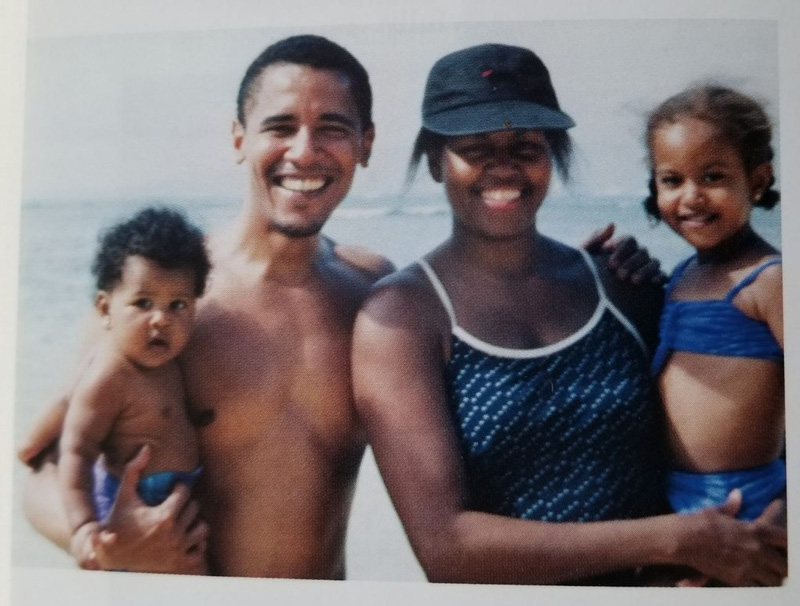 As the 2004 Illinois Democratic primary for the U.S. Senate was about to happen, Barack Obama was riding high in the polls. After almost a year of non-stop campaigning, the people who were the closest to him on his team felt the candidate and father of two (Malia was 5 years-old and Sasha who had just turned 2) — was feeling a bit demoralized and uninspired. “Your heart isn’t in it. What’s wrong with you?” commented one of his advisers.

said Obama “I don’t want to be the kind of father I had.” 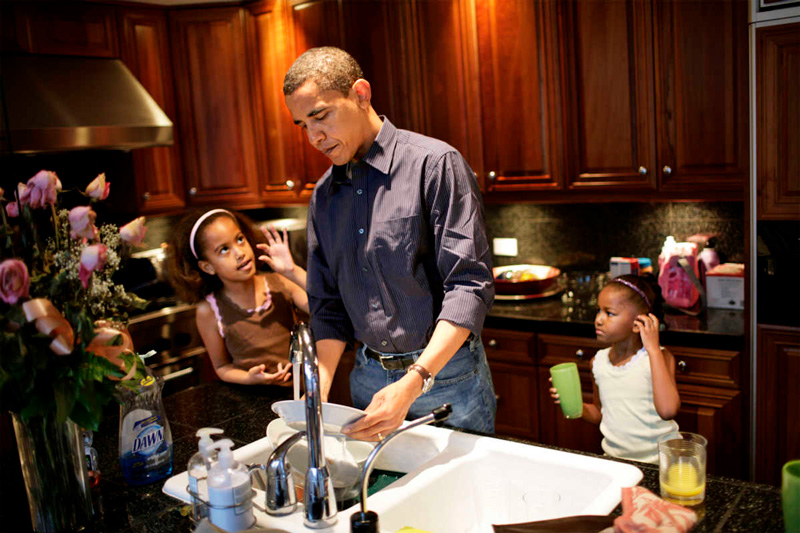 Obama, who was raised in Hawaii by his grandparents after his father left when he was very young, also recalled things he wishes he’d had done differently.

“I felt his absence. And I wonder what my life would have been like had he been a greater presence.”

“That’s why I’ve tried so hard to be a good dad for my own children. I haven’t always succeeded, of course - in the past, my job has kept me away from home more often than I liked, and the burden of raising two young girls would sometimes fall too heavily on Michelle.”

Barack made it a point to being involved in his kid's school functions as much as possible such as attending parent-teacher meetings to helping coach Sasha’s basketball team.

“In the end, that’s what being a parent is all about - those precious moments with our children that fill us with pride and excitement for their future; the chances we have to set an example or offer a piece of advice; the opportunities to just be there and show them that we love them.” 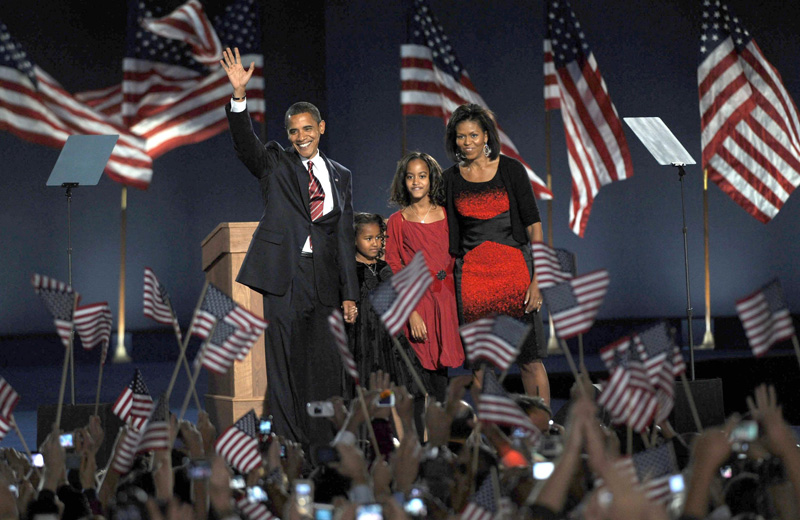 "People often ask me whether being president has made it more difficult to spend time with Michelle and the girls. But the surprising truth is that being in the White House has made our family life more 'normal' than it's ever been,"

As the President once famously said:

"It’s pretty good to live above the store."

Living in the same building as where he works has allowed President Obama to quite literally walk upstairs at 6:30 p.m. in order to have dinner with his family.

Barack Obama made it clear:

One of Barack’s former bodyguards once described it as: “Like a meeting in the Situation Room. There’s a hard stop before that dinner.”

He made it a priority to have dinner with his family five nights a week with just two nights left available for out-of-town events.

And during supper, the focus was clearly on his daughters and their day — school, friends, activities — and not his.

"Those moments where I can just be Dad — even if it's 'Daaaaaaad' — well, there's nothing better."

Quite often, Obama would find the time to eat breakfast with his daughters as well.

Barack says he survived it due to his wife, Michelle Obama, who he calls "the rock" of the Obama family. 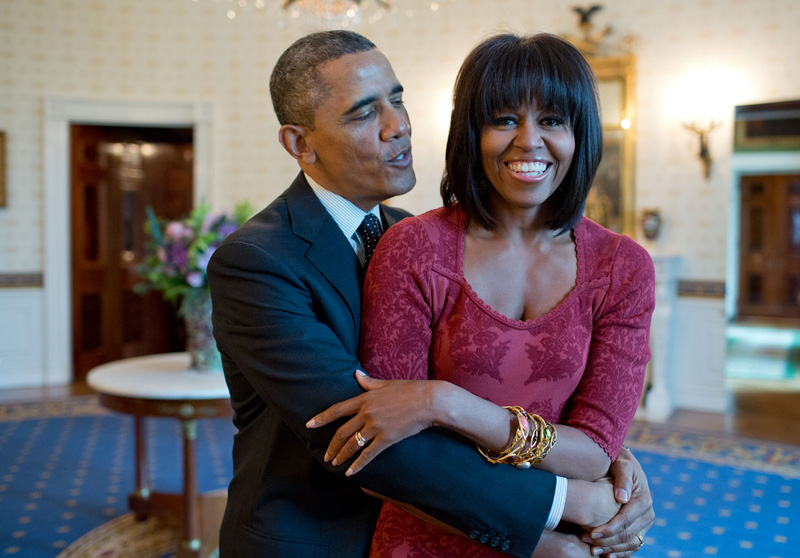 As opposed to his absentee father, He has made good on his promise to be involved by having a perfect attendance record at his daughters’ parent-teacher conferences.

“I am a black man who grew up without a father, and I know the cost that I paid for that, and I also know that I have the capacity to break that cycle, and as a consequence, I think my daughters are better off.”

said Barack while noting that even in the White House, Malia and Sasha had to do their chores and walk the dog.

“Above all, children need our unconditional love,”

“We just do ordinary stuff. We might watch a movie. We might play a board game. There's the presentation of the tie, or the painting they've made, where I make a big fuss out of it. But the greatest pleasure I get is just spending time with them.”

As the 44th President of the United States and being a highly self-confident person “It is in my capacities as a husband and a father that I entertain the most doubt.”

"Being a dad is sometimes the hardest job, but also the most rewarding."

ON PROVIDING THE RIGHT LIFE EXPERIENCES FOR HIS KIDS

"We are looking for opportunities for them to feel as if going to work and getting a paycheck is not always fun, not always stimulating, not always fair. But that's what most folks go through every single day."

ON BEING A ROLE MODEL FOR HIS DAUGHTERS

"It just so happens that I'm fortunate enough to be surrounded by women," said Barack. "They're the most important people in my life. They're the people who've shaped me the most. And in this job, they are my sanctuary."

“When I was first elected to this office, Malia was 10, and Sasha was just 7. And they grow up too fast. This fall, Malia heads off to college. And I’m starting to choke up.”

“Probably what I am the proudest of is having raised two daughters who are amazing and I am truly proud of them. Being able to do that while still being focused on my job is something that I will be able to look back on with great appreciation."

CIVILIAN LIFE - AFTER THE WHITE HOUSE

“Michelle and I are way too young to have daughters who are both almost in college now. So as a parent, I was a little freaked out,” Obama said when Malia first went to high school. 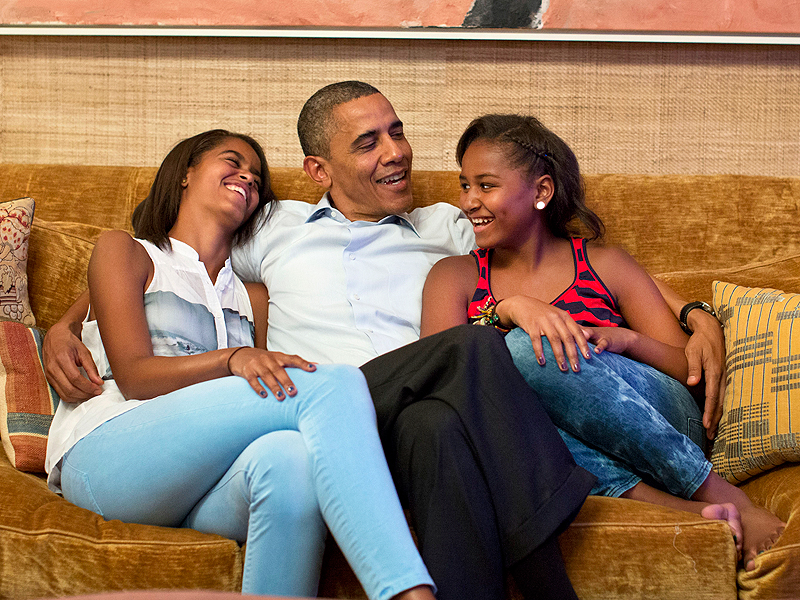 “I do a lot of commencements around this time of year — which I love doing, although my older daughter is graduating this week and I will not be able to handle that well,” Obama said at a Democratic National Committee fundraiser in New York.

“Malia, who will be graduating this week, is very eager to get out of there (the White House). I’ve got some sunglasses … one more example of the president crying,” he said on The Tonight Show with Jimmy Fallon.

“She’s one of my best friends,” Obama said about Malia to the talk-show host Ellen DeGeneres. “It’s going to be hard for me not to have her around all the time, but she’s ready to go. She’s just a really smart, capable person and she’s ready to make her own way.”

With both kids having left the house for college, Michelle Obama said that she and Barack became "empty nesters." Not only did they have more time for themselves, but their stress levels went down several notches.

With the house now being empty, she explained that she and Barack who at the time had been married for almost 27 years had a chance to 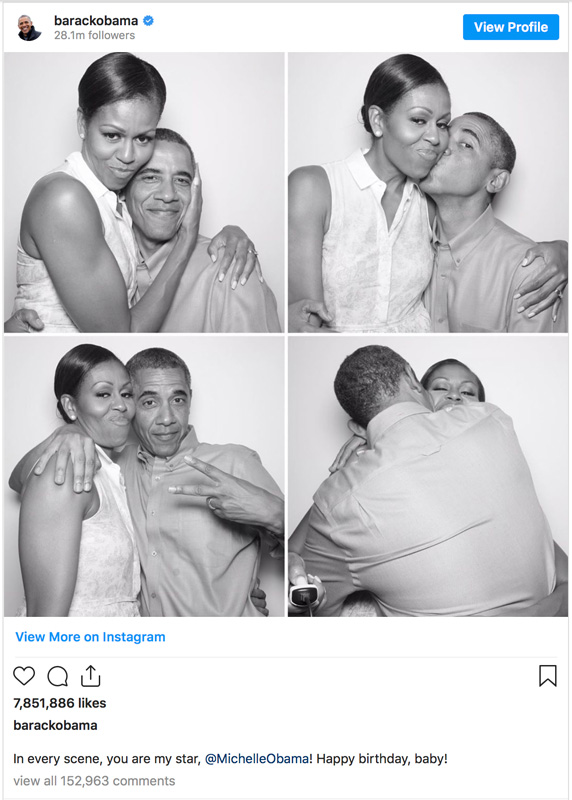 "This is the beauty of finding a partner you really love and respect -- because after all the highs and lows, the ups and downs we've been through, we have each other, which makes the journey worth it," said Michelle Obama. 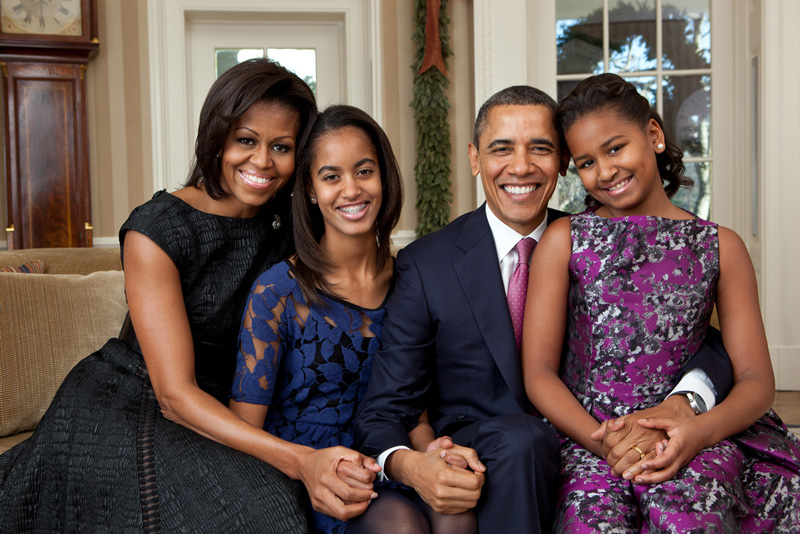 “Family First” is a widely held belief — even if it does sometimes challenge the whole work/life balance aspect of life. So it’s fitting that Barack Obama reminds us that first and foremost, he’s a dedicated father and husband.

"Nothing is more precious than the moments we get to spend with our families - in conversations at the dinner table, coaching tips shouted from the sidelines, or profound experiences of learning, growing, and teaching." 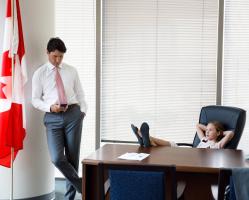 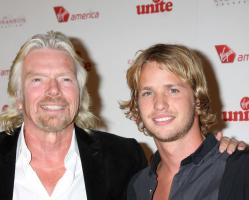 BECOME A BETTER DAD CEO
You have been able to rely on your gut instinct and intellect to succeed. Breaking barriers and creating connections with your colleagues al...
Related articles